We are a nonprofit. Collaborate with us. 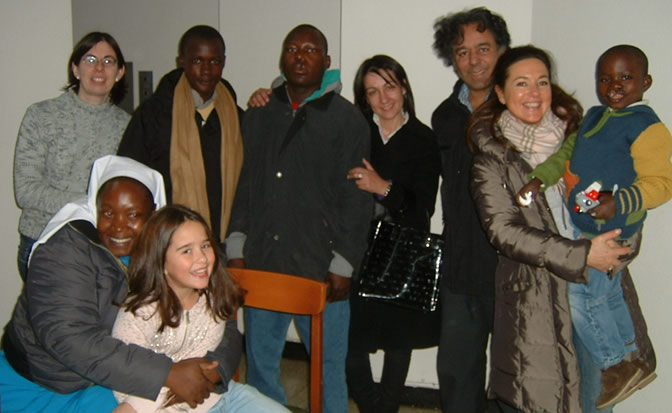 Three Ugandan children will be operated next week in Polusa by the NGO Doctors of the World. On Tuesday will be operated on two and on Friday, a third. The kids, who arrived yesterday afternoon to Lugo, staying at Diocesan House, where he will be joined by religious Gertrudis Natale, who traveled with them. The children came in short sleeves and no socks. Teresa Rodriguez Pol, one of the sisters of the Diocesan House, was busy shelter them from the cold after impact. The kids that will be operated are: Fred, 7; Emmanuel, 12, and Yusuf, 17. Two of them suffer birth defects and a third, a tumor. "The reason I come to Lugo's because no one in Uganda that operate. Say there is a surgeon for 80 million people, "says Joaquin Mendonça. This year the NGO Doctors of the World could bring, again, children of Uganda to undergo facial operations thanks to a grant from the Provincial Government and the money raised in a musical festival held this past summer in Castro Rei. Joaquin Mendonça estimated that the three kids can be in two months Lugo. During this time, the children could go to school at various schools, as happened in other years. "Os outros Foron comigo O Divine Master. There was one that was a time I went to primeira schooling, despite ter 8 years and xuntouse cos of Children. But é likely to darlles vein professor unha some class and give you something to Tamen lles Irma viaxou with eles "says Teresa Rodriguez. Typically, the adjustment to the city and the recovery operation is good among kids who have gone through the same process before. "Some families even take them on the weekends with them to play with their children and know more of Lugo" says Dr. Mendonça. In the case of a child, Ambros, who remained eighteen months in Lugo descubrírsele after cardiac injury, an important link is established with a family that pays the studies in your country. "Cando are here, a fan of all os ou xogan to bowling ball, ride bikes ou skateboarding, going to pool ..." says Sister Teresa. Despite the deformations are in the mouth, in this case the three kids can eat normally. Instead, speaking with difficulty. Last night I enjoyed the dinner prepared them in the Diocesan House, which tasted, for the first time in his life, turnip broth. "Comeron broth-to-encantou lles, peixe, froita, iogures e leite. I dyed NEEDS Primeiros days eating semper mais. Despois, Vanse Reducindo adapting and go to lunch, "he explains. Before dinner, were reading and writing. Only one of the kids speak English. The second is communicated in a dialect and the smallest, with a smile. "So as Pequenino and vindo of lonxe as veu, non quitou or sorriso of enriba" says Sister. These children first traveled abroad and discovered, as they came, running water, light and lift. World Surgeons operated on more than 300 children and adults in Uganda, where they are given a room of a public hospital to do their job. A Lugo, traveled a dozen children.